Casseroles, including Broccoli and Rice Casserole, were a staple for American families in the 1950s.  They have been made for family meals, potlucks, and family gatherings ever since. Grammie, most likely, made quite a few casseroles in her day. Looking over the recipe, it looks pretty straight forward, edible even.  Okay, so you know from the About page that we try to eat as whole and as organic as we can in our house so I’m sure you completely understand when I say that when I read that one of the ingredients was Cheez Whiz, I threw up in my mouth a little bit. And lucky me, the Hubs bought the big jar so we have some left over. What the hell am I going to do with it?

So according to the Food & Wine article, “History of Cheez Whiz,”  the cheese sauce was originally created to more easily make Welsh Rarebit in England, and found its way to America in July of 1953. That dates this recipe from 1953 onward. I would assume that most of these recipes were from the 1950s to early 1960s when my father graduated high school. Since I’m determined to make these recipes while staying as true to the specified ingredients as possible, in the pot goes the Cheez Whiz (with a plop).

In researching Broccoli and Rice Casserole, I discovered that both the Kraft and Minute Rice websites have their own recipe which is exactly the same, down to the picture of the finished project.  Their recipe differs slightly from Grammie’s as theirs calls for less liquid and more rice along with the addition of bread. 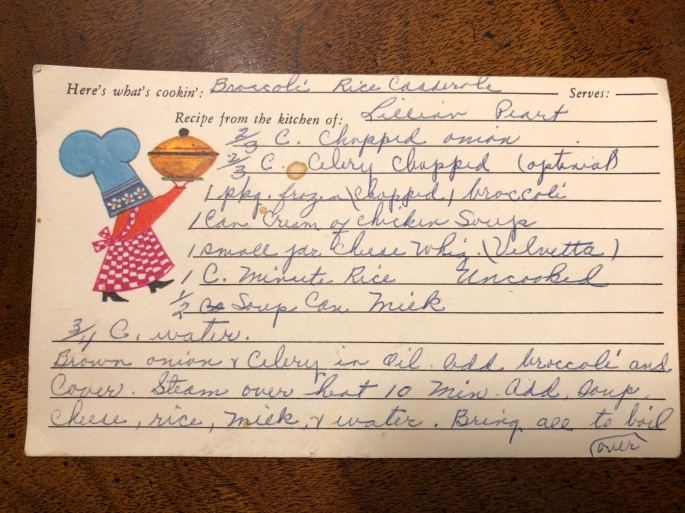 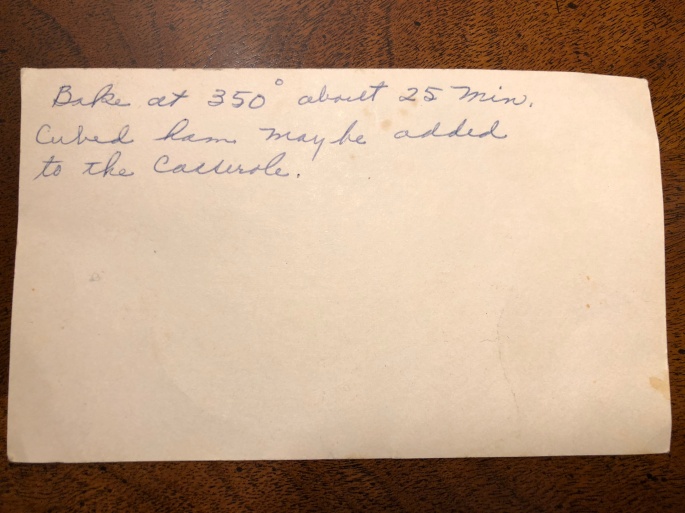 Okay, the ingredients are assembled.  I knew I had frozen broccoli but didn’t realize it wasn’t chopped until I was ready to cook so I gave it a quick chop while the onions and celery cooked down.  I decided against adding the ham since we were using this as a side dish (with delicious Asian pork medallions from Cooking Light April 2004 which I can’t find posted on their website anywhere to link to). The recipe didn’t say what size casserole dish to use, I assumed a 13×9 but I have a nice oval one that the Hubs quickly experimented with to see if it equated to a 13×9 (he likes to do that kind of stuff) and it worked out perfectly!  Now into the oven for 25 minutes. 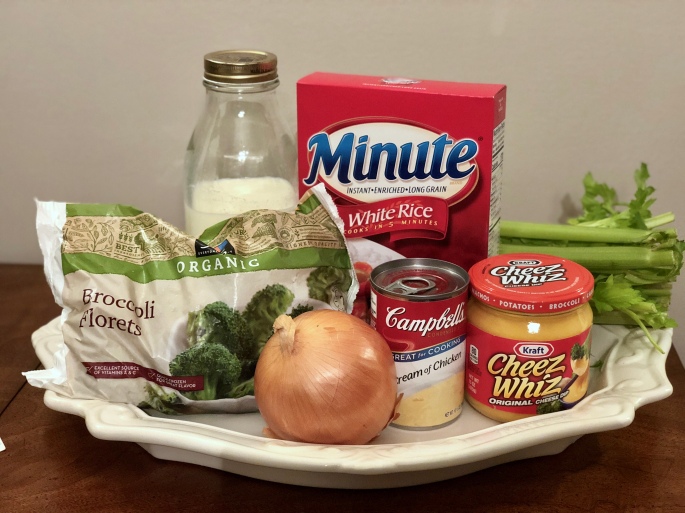 This recipe was from the kitchen of Lillian Peart.  Lillian was Grammie’s sister-in-law who was married to Grampie’s older brother, Harold (he died the same month and year I was born), and her name appears on a number of recipes in Grammie’s Recipe (chocolate) Box.  Lillian and Harold lived on the old Peart farm in Burns Township and farmed the land until 1973. She was born, raised, married, and died in the same town as my Grammie.  They lived their whole lives in the same place.  As sister-in-laws in a small town, one can imagine they saw each other often. I don’t ever remember meeting Lillian, who died in 2004, and I can’t seem to find a photo of her among Grammie’s old photos (at least not one that’s labelled with her name).  I have my feelers out but until I can find one, a cute little photo of my dad getting his hair cut by my Grampie in the kitchen while Grammie looked lovingly on (and kept him still with an iron grip) will have to suffice.  Absolutely adorable!

So this was Grammie’s kitchen.  The window over the sink looked out over the back yard with the grape arbor to the left, the garage on the right, and their neighbors horse pasture along the back.  I still remember feeding apples to the horses as a little girl.  Everything that is dark in this photo was red. From the little tchotchkes on the wall and circular decorations on the cabinets to the Formica counter top, scalloped wood valance, and toe kick under the cabinets was a bright cherry red. Grammie’s kitchen rocked that shiplap way before Joanna Gaines made it cool again.  There is no date on the photo but my dad only looks about two years old so it would have been taken around 1949 (before Cheez Whiz was invented).

VERDICT: Not So Bad

I mean, don’t get me wrong, I’m never making this again, but it was not so bad.  I’m sure there are recipes out there that are a bit healthier that we would consider for the future. Overall, the textures were a bit off.  It was a little watery, though maybe some extra rice or broccoli would have solved that. My Hubs checked on the casserole at 25 minutes and determined it needed 5 more minutes. After that, he put it under the broiler for a couple minutes to get some nice browning action on top.  We made our plates and sat down to eat when the following conversation happened.

Me: The pork is really good, I like the flavor a lot, and you cooked them perfectly.

Hubs: Thanks, the pork IS good. Your casserole is….. (gives a look that translates to “Meh”).

Me: (under my breath) Self congratulatory ass.

The twelve year old has not had it yet.  Can’t wait to see his reaction when Broccoli and Rice Casserole is all he gets for dinner!

Welcome to the blog where I cook up my Grammie’s *probably* horrible recipes and feed them to my unsuspecting family then return a verdict of “Horrible” or “Not So Bad” (because I’m pretty sure those are going to my only two options).

From Box to Book

From Box to Book